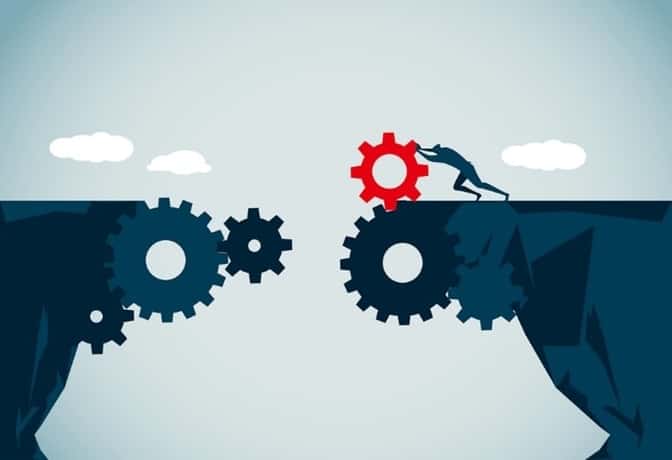 At this point we’ve developed a good sense of the technical theory of causal reinforcement learning. This next section brings together many important ideas and generalises notions of data transfer between different environments. This will prove important when we discuss imitation learning in the future. For those coming from a more pure reinforcement learning background, being able to generalise results about where and when we can transfer knowledge between related domains is clearly useful for a general agent. Let’s get going!

One of the most important features of human intelligence is its ability to generalise and transfer causal knowledge across seemingly disparate domains. This allows powerful inferences and decision making procedures possible even in foreign environments. Bareinboim and Pearl address the problem of transferring knowledge from data collected in heterogeneous domains $\Pi = { \pi_1,\dots,\pi_n}$ to some target domain $\pi^\ast$ - a problem known as $mz$-transportability. In [35] the authors establish a necessary and sufficient condition for deciding whether this transfer is feasible. In the sciences, powerful studies involving transfer of knowledge across related domains are known as meta-analysis or externally valid studies. The transfer of causal knowledge is known as transportability and is a crucial ability needed for artificial agents to automate the process of knowledge acquisition, discovery and learning.

Consider an example in which we would like to use knowledge of social science experiments done in Los Angeles (predicting outcome $Y$ with cause $X$, confounded by some age distribution $Z$) to make similar predictions in New York. Calling the distribution in Los Angeles $P(y \mid do(x))$, we would like to predict $R = P^\ast(y \mid do(x))$ - the cause/effect relationship under a different age distribution in New York. We call the process which generates this difference in age across the populations a difference generating factor, denoted graphically by $\blacksquare$, which are caused by some set of selection variables $S$. In this case we have $S \rightarrow Z$. We can then derive an remarkably simple transport formula as follows:

This deceptively simple formula tells us we can estimate $R$ - an interventional quantity - using a drop in observational distribution $P^\ast(z \mid do(x), z)$. This acts to re-weight observations by the interventional affect in a different domain. To generalise a transport formula is not completely trivial. We need to know whether $do$-calculus is complete. That is, whether $do$-calculus operations can always find such a transport formula. Recall that causal models and induced diagrams encode relationships under a particular domain. A formalism that is helpful for the study of transfer of knowledge across causal domains is the notion of selection diagrams. These diagrams graphically encode the shared causal relations and difference generating factors of different causal systems.

These $S$ variables in the selection diagram serve as identifying the mechanisms where structural differences in the data generating process takes place between models under different domains. Knowledge of these structural overlaps of different causal domains allows us to formalise what it means to transfer knowledge between domains. This is the notion of $mz$-transportability discussed earlier. Simply put, knowledge is transferable between domains only if the causal effect $R$ can be determined from information available in the observational and interventional distributions.

The above graphical condition has a counterpart that can be written in terms of $do$-calculus criteria.

Figures (a) through (f) show illustrative examples of transportability in causal selection diagrams. These highlight the important of the nature of unobserved confounders. (a) This diagram shows an example of when transportability of $R=P^\ast(y \mid do(x))$ is trivially solved by re-weighting of the variable directly affected by difference-generating variable. In this case $S \rightarrow Z$. (b) shows the simplest example in which one cannot transport a causal relation between domains. Even by randomisation on $X$, the causal effect is not uniquely computable due to UCs. (c) and (d) show examples where transportability of causal effects require interventional information over $Z_1$ in $\pi_1$ and $Z_2$ in $\pi_2$, but not over ${Z_1,Z_2}$ in the combined domain. (e) and (f) show examples where transportability is only possible in the combined domain. Figure extracted from [35].

This process of transferring knowledge relates well to the concept of unifying big data. The ability to fuse multiple datasets, collected under heterogeneous conditions, without incurring large bias penalties is something critically important for generalising an agent’s ability to learn under different conditions. In [11] Bareinboim and Pearl review this problem of data fusion under the auspice of causal inference. In [36] Lee et al. argue that identifiability and randomisation are two extremes in approach to inferring cause-effect relationships from some combination of observations, experiments and prior (substantive) knowledge. In fact, $z$- identifiability (zID) generalises exactly this question for the case where all possible interventions (experiments) are possible. The authors argue that this requirement is (obviously) not always reasonable and propose a generalisation such that any expression derivable from an arbitrary collection of observations and experiments is returned by the proposed algorithm. The following theory is developed to introduce a strategy that is used to prove non-gID (defined later) which allows for a graphical, necessary and sufficient condition for the causal decision problem of interest. We start by defining a c-component.

C-component [37]: Let causal graph $\mathcal{G}$ be such that a subset of its bidirected arcs forms a spanning-tree over all its vertices, then $\mathcal{G}$ is a confounded-component (c-component).

By this definition, figure (a) and (b) are hedges because we can find two c-forests $\mathcal{F}$ and $\mathcal{F}^\prime$ such that $\mathcal{F}^\prime \subseteq \mathcal{F}.$ Crucially, (c) is not a hedge since the spanning bidirected edges are not minimal. This type of structure prevents g-identifiability, which is now formalised and discussed. 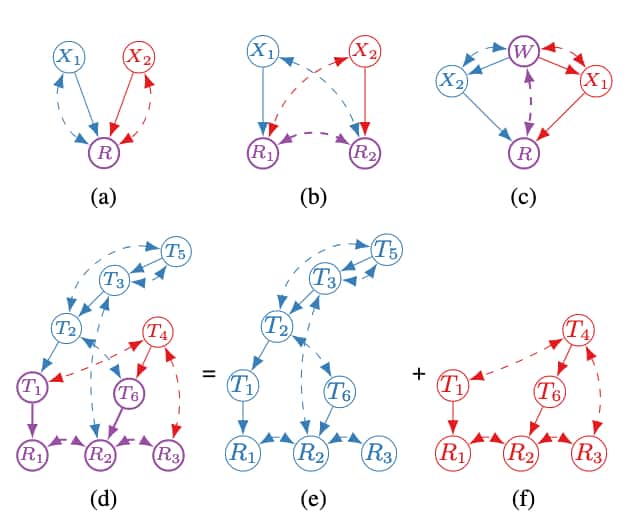 Figure showing examples of hedges, c-components, c-forests, and thickets. These form graphical criteria for g-identifiability. Details are discussed in the text itself. Thickets are shown to preclude g-identifiability. Crucially, (d) is shown to be an overlap of hedges which forms a thicket. Figure extracted from [36].

Simply put, we say the distribution is $g$-identifiable with respect to a set of intervenable variables in the causal system if they are sufficient to uniquely compute it. This set of variables are the ones we intervene on by doing an experiment, as we discussed earlier. In this way it is a generalisation of $z$-identifiability discussed earlier. We now introduce some more definitions needed for the non-gID criteria.

Referring back to the reference figure, some possible hedgelet decompositions are colour coded in blue and red to indicate distinct hedgelets, with purple used to indicate the shared variables (commonly root sets). This leads us nicely to the last definition we need for this criterion. Though this definition appears arbitrarily technical, it is rather intuitive once the reasoning is developed.

Let’s consider this definition step-by-step by considering figure (c). First, we notice the graph is a c-component that contains a minimal c-component. It does not necessarily need to be a c-forest itself. Next, we need a pair of $\boldsymbol{R}$-rooted c-forests \(\langle \mathcal{F}_{\boldsymbol{Z}}, \mathcal{J}[\boldsymbol{R}] \rangle\). We select the graphs induced by sets ${W,X_1,R}$ and ${W,X_2,R}$ with $\boldsymbol{Z} = {{X_1},{X_2}}$ the intervention set. Then we have hedges \(\langle \mathcal{F}_{X_1}, \mathcal{J}[R] \rangle\) and \(\langle \mathcal{F}_{X_2}, \mathcal{J}[R] \rangle\) that overlap and have intervention variables $Z\in\boldsymbol{Z}$ that do not intersect with the root set, $\boldsymbol{R}={R}$. Basically, a thicket is an overlapping of hedges, and hedges were the ‘bad’ structure that prevented gID in the causal graph. Though this is a fairly involved procedure to do manually, especially on large causal graphs, it is algorithmically feasible as shown in Lee et al. The usefulness of this algorithm relies on the following result.

To make this idea explicit we include the following figure extracted from slides provided directly by Sanghack Lee, coauthor of several papers (including [36]) presented in this work [38]. 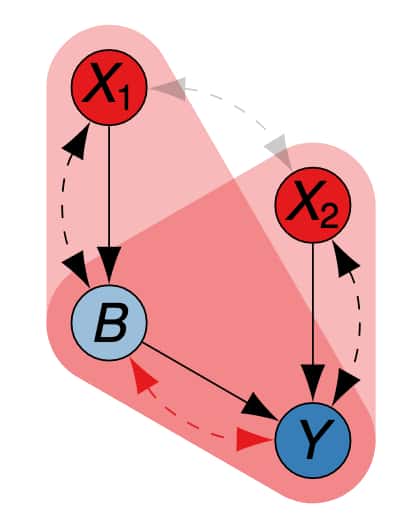 Thicket structure for $P_x(y)$ identified as an overlap of distinct hedges, each colours as a red rounded triangle. Extracted from [38].

This completes the required formalism’s for identifying structural constraints from explicit causal models. This ties well into the next section in which we discuss how we can apply this theory to learn causal structure from observational and interventional data. This is especially useful for allowing reinforcement learning agents to uncover causal structure.