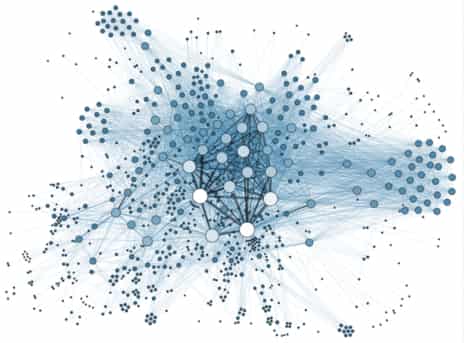 Last time we discussed how we can learn causal structure from data and thought about how this relates to machine learning. Specifically, we noticed that having more data in a semi-supervised learning context can actually lead to descreased performance. Up until this point we have only developed the notions necessary to consider bivariate models - models of no more than two variables. To make this a robust theory we really need to consider models in which there are more than two variables. This raises certain problems. For one, a third variable could be a confounder, a mediator, another parent node, or even another independent effect. We are going to need to consider some additional assumptions necessary to get to a similar method of identifying causal information from data. Developing some graph theory will put us in good stead for later theory, so let’s get straight to it.

We can extend these conditions to define d-separation for two disjoints sets. We say sets \( A \) and \( B \) are disjoint if every path between elements the two sets are blocked by another set \( S \). We write this formally as \[ A \perp_G B \mid S. \]

We had previously developed some basic ideas for structural causal models, mostly in the context of 1-3 variables of interest. We now generalise this theory.

Peters cautions against thinking of these definitions as ‘equations’ because they are, in fact, assignments. We could generate the graph corresponding to an SCM by creating a vertex for each variable, \( X_i \) and creating a directed edge from each parent (direct cause) to the variable. We assume this graph is acyclic. Theory dealing with the cyclic assignments has been established, but we don’t consider this further now. An example of generating a set of structural assignments in R is shown below (see Elements of Causal Inference).

The important question for now is how can we model interventional changes in our causal system? Once again, I stess the difference between intervention and conditioning. In general, interventional distributions will differ from conditioned distribtions.

An intervention where the set of direct causes remains unchanged is said to be imperfect. Thinking of our causal model as a graph, the allowed interventions become clear.

Ultimately, we would like to be able to quantify the causal effect of different variables on other variables. This motivates the following definition.

Peters develops several equivalent statements for determining whether there is a total causal effect between two variables. Since we will often be thinking about causal models in terms of graphs, I’ll develop the graphical critera for total causal effects.

Graphical Criteria for TCE: Given an SCM with a corresponding graph \( G \):

One of the biggest achievements in the design of experiments was popularised by Fisher in The Design of Experiments in which he develops the randomised control trial (RCT). This process of randomisation of a certain variable removes any causal links by intervening on it. This was pivotal to biochemical industry in which placebo effects are crucial to quantify. 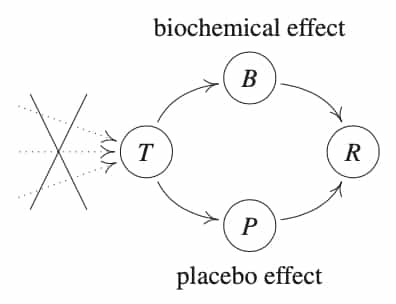 In studies of new drugs, we would like to be able to distinguish the effects of the drug from placebo. Consider two treatments, \( T=1 \)and \( T = 2 \), while \( T= 0 \) represents no treatment. By randomising on treatment, we remove possible confounding causes on treatment. Assuming the placebo effect is the same for both the drug and the no drug situations, we have structural assignments that satisify:

Voila! Observing a dependence of recovery on treatment now establishes a causal link (under the causal model assumptions).

Nex time we step up a rung on the ladder of causation, finally reaching counterfactual reasoning - a tremendous contribution of the field of causal inference.